How Jeremy Kyle stopped me from going to KFC

Jeremy Kyle is helping me lose weight. Technically he has no involvement or say in the matter, but he is the reason I haven’t gorged myself on bacon-wrapped Wispas or whiskey-covered pizzas. Today I went shopping with a mate, and our usual ritual involves worshipping at the house of the Colonel, namely KFC. I think I rattled the poor guy, as his look of genuine shock seemed to be waiting for the revelation that I was ill, perhaps that I had been diagnosed poultry intolerant. Or maybe even the news that a southern-fried (in the Colonel’s unique blend of herbs and spices) chicken had murdered my parents, Batman-style and that I was now an orphan with an insatiable vendetta against fowl. But it was Kyle, with his “I’m on such a high horse I get a nose-bleed up here, you scumbag!” smirk and his “I know the baby’s yours, you troglodyte” snort. Jeremy Kyle, without even knowing it, stopped me from going to KFC.

This has come about because today I was reminded of an episode of JK’s morning show from a couple of months back. The Jeremy Kyle Show, for the uninitiated is perhaps the most garish, and therefore compelling three-ring circus left in this country. It is everything you loved about Jerry Springer combined with everything you hated about being told off at school. Rather than just kick back like the Springster and watch the action unfold like the wonderful, slow-motion car crash that these shows are, Jeremy gets stuck in like he’s separating two six year-olds arguing over whose turn it is with the Tickle Me Elmo. He tells everyone to “look at me when I am speaking to you!”, to “shut up because this is my show!” and that “I’m Jeremy Kyle!”. And he delivers these lines as if he’s George Bush addressing the Al Qaeda office party; Dripping with witty, uneducated yet utterly thrilling contempt. At least it was thrilling, until he started doing it to me in my head.

So three men walk into a pub. A Palestinian, an Iraqi and a Kosovan...

Seeing Jeremy this morning in his natural habitat, teeing off on his monosyllabic opponents, reminded me of a “special” episode of the show that aired late last year. Now normally the show just features Kyle in verbal set-tos that are to intelligent debate what David Haye vs. Professor Stephen Hawking would be to Boxing. Jeremy, a university-educated former gambling addict who’s had scores of affairs, is clearly the ideal candidate to belittle uneducated people who are often gambling addicts or people who’ve had scores of affairs. Excuse me a second, an uneducated gentleman just walked past the window and I need to tell him he’s fat, his hair’s too long and his beard is rubbish.

He's coming for you David Haye. Be ready.

This special episode was a medical edition, basically Jeremy Kyle standing next to doctors and angrily repeating their medical advice to more sickly looking versions of the usual gutter-scrapings he has on as guests. Because these were no ordinary medical complaints (though Jeremy screaming “you’ve got a cold you absolute Neanderthal, get off my stage before I set fire to your grandma’s bungalow” would have been worthy of a broadcast), these were medical problems as freakish as the knuckle-draggers who suffered from them. This episode dealt with obesity and you can probably see what’s coming.

Now I don’t have a gambling addiction, I’m not an alcoholic, I don’t have a wife to beat and I’m not pregnant with the milkman’s baby (as of my last test). Therefore Jeremy’s brand of idiot-seeking put-down missiles generally land on others leaving me only with feelings of amusement. But this episode was shocking. After his usual bout of emotionless but rigorous hand-shaking with his terrified audience, Jeremy brought out a really fat bloke. It was a while ago now and I don’t remember his name so we’ll call him Flabtimus Prime. Now Flabtimus was having a rough time, he’d managed to lose his penis under his stomach and he certainly wasn’t going to find it in the boxes of Miniature Heroes he had under each arm. Or not, I forget the details. Anyway, FP was struggling to satisfy his considerably smaller lady, whose posture looked to be the biggest victim of their peculiar trysts. So Jeremy held both their hands, sympathetically and gently, quietly, barely audibly he told them he was here to help. I’m kidding of course, he made Flabtimus take his shirt off and then strapped him to a slab.

Once on what will henceforth be uncharitably named the Flab Slab, Flabtimus Prime was berated, insulted and mocked for being a tub of worthless lard. Suddenly the smile drained from my fat little face. I felt how the black passengers at the back of an Alabama bus felt when Rosa Parks was verbally abused by staff for refusing to give her seat to a white man during the Civil Rights movement. Another column, another comparison of my weight loss attempts to a historical watershed. I digress, Flabtimus was copping it bad from Jezza. The doctor kept trying to interject with medical information but JK just kept insisting the guy was going to die almost immediately, leaving his wife a widow in need of both sexual relief and a chiropractor (though some places apparently do both).

Slightly braver than me. Slightly.

This hit home for me and thus despite being a man who, if you’ve read the previous blogs you’ll be aware has maintained visual contact with his most valuable asset despite these tubby times, I turned down the KFC. Why? Because no amount of fried chicken, or fried anything really, could persuade me to go on the Flab Slab. I don’t want Jeremy Kyle spitting on my man boobs and telling me “to man up!”, or “to start acting like an adult!” and “to get off the drugs, stop molesting badgers and look after your baby!” I don’t want my bare chest appearing on television until my abs are so defined they make Daniel Craig in Casino Royale look like a blonde-haired, craggy-faced chump who shouldn’t be James Bond. Or, you know, more so. 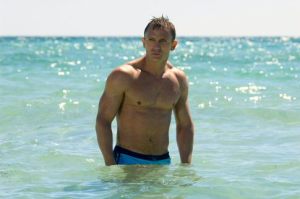 I think Google is broken. I typed in "James Bond" and this twerp came up.

I must leave you now, and I sign off with the news that I’m going to stop promising you things because as the eagle-eyed amongst you will surely be aware, today’s column didn’t include the Rocky V musings, the gun-wielding farmer story or the death metal jogging advice. All those things will come, but too much happens to me for me to know exactly when. Probably tomorrow. Probably not though, I’m avenging my parent’s deaths at the hands of a rampant zinger burger.